“The Edge of Tango” is a group of renowned tango musicians united in this common project for the recovery of the material and repertoire created in the mid 1950’s by two great Argentine composers who marked the history of modern tango.

They are Astor Piazzolla and Eduardo Rovira. Each with their own formations: Astor Piazzolla’s Octeto Buenos Aires and Eduardo Rovira’s Octeto La Plata have revolutionised and changed tango forever.
The group culminates this process of research and hard interpretative work with the recording of a double album under the same name “The Edge of Tango”.

This recording is based on the recovery of Octeto Buenos Aires scores, which were burned by Piazzolla himself, as well as the scores of the Octeto La Plata (read more about OLP), which were partially lost during a flood. 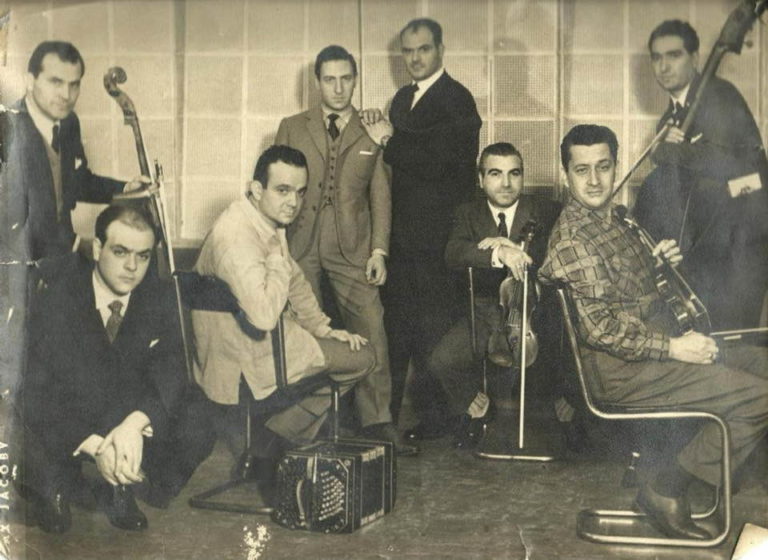 The Octeto Buenos Aires (OBA) was a legendary tango group. Its brief but significant history is considered the turning point between two eras and two types of tango.

The octet had a great influence upon some of the musicians who were thinking of different ways to modernize tango in the same time period.

Piazzolla was carried away by a certain excess in the music he wrote for this octet, based on the classic tango sextet, with the addition of a cello and an electric guitar (something new for the time).

However, seen in perspective, what seems like a chaotic explosion of creativity is instead based on an artistic manifesto that Piazzolla respected very strictly.

This manifesto sought to place the commercial aspect in the background; to incorporate arrangements of classic tangos and as well as new creations into the repertoire; to not include sung works; and to not perform at dances, but only on radio, television or in concert, or for recordings.

The works would be explained before executing them, in order to facilitate their understanding. The purpose of the project was to improve the quality of tango, convince those who had turned away from tango, as well as the genre’s detractors, of tango’s unquestionable values, attract listeners of foreign music, and conquer the general public.

The complete repertoire of the octet included nineteen arrangements, of which eight are included on “The Edge of Tango”.

Among the compositions, the beginnings of traditional tango are represented by Rosendo Mendizábal.

The main composers of the Decarean school are also present, including Julio De Caro himself and the bandoneonist Pedro Maffia, as well as their highly regarded counterpart Juan Carlos Cobián, whose works were of great harmonic and melodic interest.

Finally, several exponents of modern tango are included, such as Horacio Salgán and José Pascual, in addition to compositions by Horacio Malvicino and Piazzolla himself.

The only surviving original manuscript of an arrangement is that of the tango Arrabal, since Piazzolla burned a large part of his scores.

The other seven arrangements included in the album had to be transcribed from the recordings, which were all commercially released except for Tierra Querida, preserved thanks to a non-commercial live recording of a 1956 concert held at Montevideo’s Sala Verdi.

This album recovers and highlights the arrangement of Tierra Querida by allowing it to be heard in using new recording technologies and with new musicians.

The classic tangos arranged by Piazzolla for the OBA generally follow the sectional structure of the original work. For example: Taconeando (by Maffia and Staffolani) has an ABA structure, according to the score, and the OBA version is ABAB.

The same can be said of the extension of these sections: the number of bars is respected. However, the arrangements include melodic modifications or changes in the resolution of various phrases. In the repeats, the melodies are also modified, generally flouting the expectations of a listener who might know more traditional versions.

There are tempo changes in all arrangements. Piazzolla almost always avoids the accompanimental model marcato in four, and instead replaces it with other variants or with a tango “walking” bass.

Modernity is present throughout all of the pieces, but the introductions and codas are especially modern. For example, Taconeando includes a very extensive coda in which the electric guitar improvises on a kind of tango riff.

On the other hand, taken individually, the codas and introductions, as well as the melodic modifications that Piazzolla interspersed in the arrangements, are perfectly idiomatic to tango.

In all the arrangements, the electric guitar plays a leading role: it plays chords together with the piano, or in parallel lines with the bandoneons or violins. Thus, the electric guitar is perfectly integrated into the ensemble, although it brought forth a completely new timbre for tango music when the Octeto Buenos Aires appeared.

On the other hand, the electric guitar improvisations were, foreign to the genre.

However, although Malvicino’s improvised lines were not typical of tango, they are rhythmically neutral, and when incorporated into the arrangements they function as an expansion of the possibilities of the genre.

Check this video where you’ll find the guitar solos highlights

Tangology, composed by Malvicino to show off the electric guitar, is a display of the instrument’s possibilities.
A complete arrangement of the OBA consists, therefore, of a continuous alternation of instrumental solos, tutti structured in different ways, tempo changes every few bars, as well as variations of the melody which range from simple modifications to others which are completely unrecognizable from the original piece.

Each arrangement requires the octet to function as a true chamber music ensemble.

The compositional writing is irreproachable in every way, with great structural clarity, and is completely ground- breaking for the time period.

On the other hand, the types of arrangements used by the most advanced orquestas típicas of the time, which performed very elaborate arrangements, included two or three successive sections with some recapitulation and were strongly based on (danceable) rhythmic homogeneity and the clear and prominent projection of the melodies, in order to satisfy the expectations of the listener.

Piece by piece description - "The Edge of Tango" album

Of the repertoire recorded by “The Edge of Tango” on this album, Marrón y azul was composed in Paris in 1954. This arrangement takes advantage of the great rhythmic potential of its first section with the intervention of the bandoneons; and in the lyrical section Piazzolla introduces a violin solo and an increased string presence. An extensive coda based on a tango riff leads to improvised electric guitar part.

Piazzolla takes an opposite approach in Tierra Querida (Julio De Caro); the piece begins with a guitar improvisation while the rest of the group unveils the material of the modified piece, leading to the first section with tango fraseos, melodic variations and harmonic modifications. The second section is marked by cello and violin solos, leading to a short coda.

In Los Mareados (Juan Carlos Cobián), ample space is given to the strings at the beginning; they then follow bandoneon lines that are improvisational in character, although the parts were completely written out. The arrangement includes numerous changes of tempo and character culminating in greater intensity towards the end, that dissipates the melody of the refrain in a few measures.

Although all the arrangements are very contrapuntal in nature, the beginning of Taconeando (Pedro Maffia) is especially intricate; the second section is heavily modified with variations and linking passages before arriving at the extensive coda, mentioned earlier.

El Entrerriano (Rosendo Mendizábal) has been particularly reformulated, perhaps in a nod to its traditional tango character.

The first section of Tangology (Malvicino) includes a long cadenza for the guitar, makes great use of the 332 rhythm with limited harmonic mobility; the second part is expressive and introduces a bandoneon solo.

The arrangement of Arrabal (José Pascual) makes use of dialogue between strings, bandoneons and the piano, bass, and guitar group.

Finally, in A fuego lento (Horacio Salgán), Piazzolla pays homage to the avant-garde nature of the piece, creating an arrangement that functions as a “tour de force” for the group, with a striking ending featuring three alternating solos of the two bandoneons and the electric guitar, which, as far as we know, were indicated in the scores as improvised, although the bandoneon parts were previously prepared.

Without precedent in tango, the Octeto Buenos Aires was an experimental project by Piazzolla, through which he proposed a new way of addressing the genre that required a new approach to listening to tango, much more arduous than that of traditional tango.

The experience did not have enough public to be financially viable, and, furthermore, tango in general was on its way to a major crisis, in full struggle with other popular genres that were emerging, including rock, tropical music, the bolero, etc.

The OBA lasted just two years but it left an indelible mark on the history of tango.

Text by Omar Garcia Brunelli for “The Edge of Tango”.